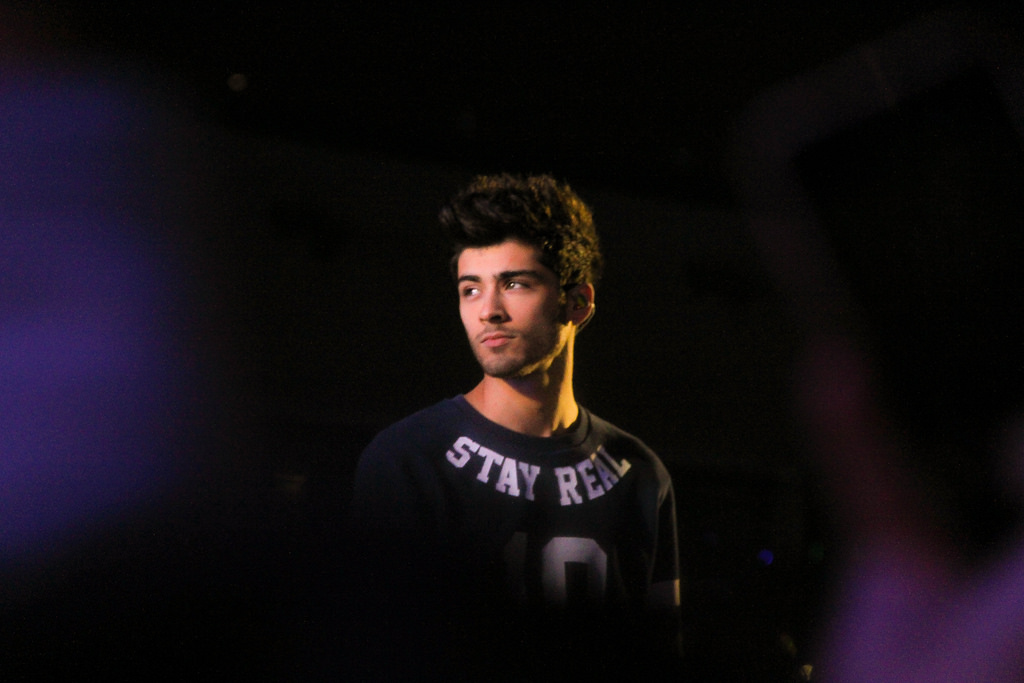 I’m going to try something a bit different with this edition of Sarah Says. Since the readers of Ominocity are clearly huge boy band fans, by now you’ve probably heard the news that Zayn Malik, one fifth of worldwide phenomenon, tween-adored super boy band One Direction has decided to leave the group. The decision followed closely his signing off from their current world tour due to “stress,” which followed closely the appearance of photos on the internets of him getting suspiciously handsy with a hot chick that wasn’t his fiancé in Thailand. All of which leads me to this, an edition of Sarah Says devoted to completely unsolicited and likely to never be read by the intended recipient relationship advice for Zayn Malik.

Zayn is 22 years old and has been an international celebrity and object of the wet dreams of prepubescent girls (and some of their mothers) since Simon Cowell put the members of One Direction together during the 2010 season of The X Factor. This means that female fans have been throwing themselves at him since before he was old enough to legally drink alcohol.

Zayn met his fiancé, Perrie Edwards, when One Direction performed on The X Factor in 2011, the year that Perrie’s girl group, Little Mix, was competing on the show. The pair started publicly dating in 2012 and despite an on-again, off-again history, got engaged in 2013.

Perrie was photographed without her engagement ring earlier in March, getting the rumour mill running at full speed before Zayn was spotted outside a nightclub in Thailand with a tattooed blonde later identified as 19-year-old Lauren Richardson. Photographs of Zayn and Lauren looking very comfortable with each other (in one picture the two hold hands, in another he drapes his arm around her and rests his hand on her bare midriff) quickly went viral and the predictable onslaught of hysterical tweets and posts from 1D fans began in earnest. Zayn tweeted at the time: “I’m 22 years old… I love a girl named Perrie Edwards. And there’s a lot of jealous fucks in this world I’m sorry for what it looks like x” (sic)

Zayn left the One Direction tour citing “stress” and returned to England for what the press dubbed “crisis talks” with Perrie in order to repair the damage, which apparently lasted five hours at the house they shared before she left with bags packed and engagement ring nowhere to be seen.

On Wednesday, March 25, Zayn announced that he would, in fact, be leaving One Direction entirely. In his statement he offered the following as explanation: “I am leaving because I want to be a normal 22 year old who is able to relax and have some private time out of the spotlight.” He also mentioned that Perrie was supportive of his decision, prompting the internet to instantly brand her as One Direction’s Yoko Ono.

Based on everything I’ve read about the situation (and we know, of course, that the internet only ever tells us the truth, especially about the private lives of celebrities), I’ve got some advice for Zayn and his fiancé. The crux of it is: open your relationship. If any relationship could benefit from a little bending of the monogamy rules, it is the one between young, beautiful, talented and world-touring performers in their early 20s. You want to get married? That’s great. You want to have someone to come home to? Who doesn’t? But since both of you are often going to be jetting off to various parts of the world and leaving each other for long periods of time to be surrounded by adoring fans, why not give yourselves the freedom to enjoy some extracurricular fun in a safe, mutually agreed upon and respectful manner. Set whatever rules you like. Always using protection with other play partners is an essential one, but you can say no kissing or no anal sex or wherever it is that your limits will lie. Talk it through, decide what you both can live with and then continue being honest and open with each other. You can have your cake (a happy, supportive relationship waiting for you at home) and eat it too (lots of sex with groupies that will count the experience as one of the major highlights of their lives). It’s a win-win situation for everyone involved.

Now while you’re at it, if this whole situation works out for you and you do end up getting married and living happily ever after while simultaneously enjoying the sexual adventures readily available to you as part of the rock star package, tell us about it. Tell your fans, tell the media, tell the world. The truth is, a lot more people have “arrangements” that fall outside the rules of strict monogamy than we realize, because these people don’t want to face the scrutiny that comes with a taboo-bending topic like open relationships. The idea that non-monogamous relationships are doomed to fail exists because the ones we usually hear about are the ones that didn’t pan out. If you, universally adored pop stars, can make it work, then anyone can and the world needs to hear stories about successful couples who also fuck other people.

In closing, I’m generally not in the habit of giving career advice, but, Zayn, I hope you’ve invested your portion of One Direction’s net worth of £70million wisely, because if you’re counting on a solo career just remember for every Justin Timberlake, there is a Chris Kirkpatrick (look it up).