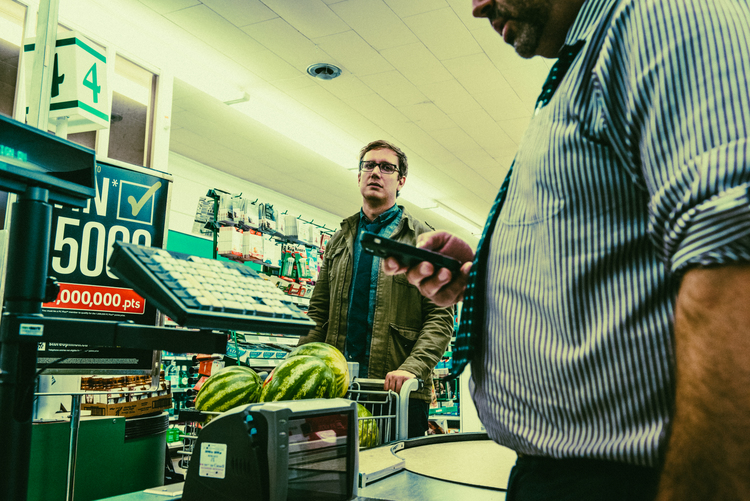 Talk to me in thunder and lightning: a look into The Wastes by Economics

The Wastes might be “the only divorce-themed dance album” – that’s okay though, because it’s really, really good

Dean Summach, also known as local instrumentalist economics, has been quietly making music in his basement since the early 2000s. From choppy yet eloquent 4-track recordings to opulent multi-layered accomplishments, Dean’s proficiency for his craft has grown with him. When I heard about his upcoming release, The Wastes, his second full length album, I felt a mix of excitement, apprehension and curiosity.

“I’m nervous for you to hear it,” he says. “Though I’m more nervous for my family to hear me sing.”

I should know. I’ve known him for over ten years. We were married for five. Currently divorced for three.

I’m nervous to listen to it, I admit. Who wouldn’t be?

“The only divorce-themed dance album” he tweeted a few weeks early.

“Can I still interview you about it?” I ask.

“Sure. As long as you don’t ask me questions about our relationship.”

So here I am. A pre-release of the new economics album, The Wastes, in my hand.

His first album, the self-titled debut from 2008, was recorded in our first home together. We played shows
together. The first show we played, I was three months pregnant with our son. Track six of that album is about my grandmother passing away from cancer.

Now, I’m holding in my hand a copy of an album that my ex-husband has publicly stated is about divorce.

“Less about divorce,” he clarifies in a text message, “and more about change and life adjustments.”

I can’t help but feel responsible.

With my son – our son – bouncing on the couch wearing one of Dean’s old sweaters, I download The Wastes.

“We Didn’t Make It” is the first track. The song we recorded together. “You couldn’t wait to throw it all away” he sings. “A thousand pieces, all the ways I broke myself to fix you” I respond.

The music swells – the way Dean’s music always has, in that delightfully hand-crafted, melodically lo-fi kind of way. I have had the rhythm in my head since we recorded it a few months ago. I imagine where I might come in with my guitar.

Wherever he told me to, I remind myself. This was always just his. I was just backup.

But I can’t help but wonder why our collaboration is the first track.

“I wrote the music for this song years ago,” says Dean, “and I always thought that it sounded like a good opening song for an album. I also think that a collaboration with my ex-wife to start the album will surprise people a bit.”

Collaboration with his ex-wife aside, I think that people who have followed Dean’s music will be surprised. Still wound in luxurious layers of simple sounds, this album incorporates much more electronic and poppy noise than his first full length. While his earlier recordings were really organic (I remember clapping for twenty minutes straight to get a natural-sounding clap for “Wrangle Island” on his first record), this effort is a blend of new synth toys and those subtle, earthy details that makes Dean’s music so interesting to listen to.

He used to write with a guitar on his chest, picking away at notes between mouthfuls of Spitz and checking basketball scores, until finally the chords aligned. But I can tell from the way the notes come together, this was written differently.

“Most of these songs started with a beat and a synth line. I use the guitar less and less these days, but it’s still there in most songs,” says Dean. “I’ve become more and more into dance music over the years, and figuring out why hearing a certain kind of beat makes us want to move around like weirdos. I’m more focused on making people dance with this one.”

Another thing long-time listeners will notice about The Wastes is that every song features lyrics, and a good portion feature collaborations with other local artists, such as soso, Maybe Smith, and Shawn Karpinka.

“I worked with people who I trusted. I’m not comfortable writing lyrics, so I picked people who I knew could give the song a boost with the right words, like you, Troy (soso), and Brendan Flaherty. Others, like the Karpinka Brothers and Maybe Smith, are geniuses at writing catchy, memorable hooks.”

When Dean first asked me to write a song with him, I had no idea how to respond. He sent his lyrics in draft form, and very quickly I was able to craft a response.

“This is perfect. Exactly what I hoped you would bring!” he responded when I emailed him the lyrics months ago. “I had no idea what you might say.”

But in listening, start to finish, my initial fears subside. While the first half of the album really speaks to Dean’s older style of writing, and speaks a lot to our divorce, by the end of the album something completely different has emerged. It actually doesn’t sound much like Dean at all, but I’m still nodding to the beat. Kind of like how Dean isn’t really Dean anymore, either. At least not the Dean that I met a decade ago.

Fitting that the album title, The Wastes, comes from a book called The Chrysalids – a novel by John Wyndham that was my favourite growing up, and was one of the very first gifts I ever gave to Dean. The Wastes were dark places filled with outsiders – but in those dark places, characters found life again. Our son is named after this author, and this album named after the darkest thing the author imagined.

“All of the songs in the second half of the album are about being single again and finding new relationships, and all of those weird things. It was a new world for me. I lived with my parents up until I married you, and you were my first real girlfriend. Suddenly I was living alone for the first time, and going out and meeting people for the first time in about seven years. It was like I was frozen and thawed out seven years later.”

An album about divorce and being single should be depressing as all fuck, but this surprisingly isn’t. And this was my divorce, too of course. I expected that listening would leave me in an emotional stupor for days. But I wasn’t depressed by listening to it, and I get a real sense of positivity from the writing from his end, too.

An album about divorce and being single should be depressing as all fuck, but this surprisingly isn’t. And this was my divorce, too

“When we split up, I felt like there was a fork in the road: I could either hide away and wallow and feel sorry for myself or I could try to change things and embrace the opportunity to be out on my own,” he says.

“The hardest part was managing the anger, but that’s much easier to do when you think about your child and try to make the best life for him. I found it easy to write, because it was the best way to me to manage the painful stuff. I once I knew how to manage that, I knew I could become a better dad.”

Midway through listening to The Wastes, I have to break and send Dean an unrelated email. We need to make some arrangements for the switch – how we get our son from my home to his home, with everything he needs along with him.

Dean and I speak to each other on a nearly daily basis – there is always something about our son that we need to discuss, and we commit to discussing. I wonder what our son will think of all of this when he’s old enough to understand.

“I hope it’s like a bit of a scrapbook for this weird time in his dad’s life,” Dean says. “I look forward to talking to him about it someday, and focus on the positive things that I have learned over the last few years.”

My son has since wound himself down and has fallen asleep on my shoulder as I write. I carefully snap a photo and send it to Dean. This is the kind of thing we both do regularly, and has a huge effect on how we continue to relate to one another. I suspect that these kinds of things would influence the kinds of things he writes.

“I think if we didn’t have a kid, we wouldn’t have much reason to talk to each other at this point, which may lead to me writing a bunch of nasty songs about you. But because we’ve maintained a friendship, I don’t have this villain to blame, and so I write and reflect more about my own mistakes.

“That’s why I was very happy to have your voice on the album – I didn’t want people to think this was all my perspective of a broken relationship, and that you could have a say as well. I’m really glad you were on board and I’m really happy with the result.”

I am too. From start to finish, The Wastes is a poignant glimpse into a ridiculously difficult point in Dean’s life. Something the listener couldn’t fully understand. Something that I couldn’t either.

In many ways, it is reflective of other things he has done musically in the past. I recognize his guitar picking style, and enjoy where he’s brought the drums in on an up-beat. I recognize some of his favourite synth effects, ones that I heard years ago creeping up from the basement of the home we shared together.

“Get a new synth, Summach!” I laugh to myself, and enjoy the surprising place it takes me all the same.

In other ways, the album feels unrecognizable. Foreign. Good, in a way that is completely unfamiliar. In a way that you might pick up the next album from any artist you really enjoy and hope for familiarity and are stunned by the progression.

Typical Dean. And yet not so typical. And the not so Dean is just as comforting – perhaps even more.

How do you separate art from artist? It’s a question that has plagued critics for ever, really. But in The Wastes, I feel myself contented by the separation – not only the emotional turmoil we went through to get to this point, but that Dean is now a completely different artist, and man, than he used to be. He grew up. At the other end of all of this, is art and an artist that I respect. And a man who will continue to by my friend, and co-parent to our son. The two now live separately. Across town. In different homes, going different directions. But still in that place we keep for artists we know are capable of great things.

Economics will be celebrating the release of his upcoming album, THE WASTES, at Amigos on October 25, along with Dead Soft and Body lvl.