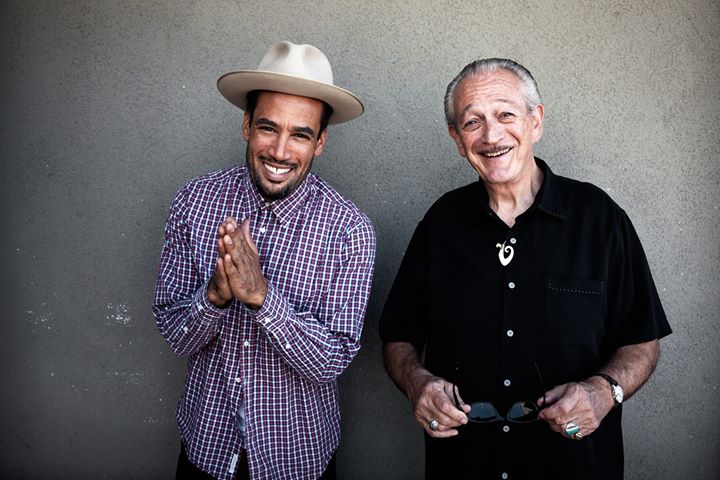 Ben Harper and Charlie Musselwhite met at Australia’s Bryon Bay Blues Festival in 1996. Despite the difference in age and background, the two hit it off immediately.

In the grand but all-too-rare tradition of full-album artist collaborations, Get Up! (Stax/Concord Music Group) is a modern blues classic. The release, Harper’s 12th studio album, surveys gospel, roots, country and R&B, the marriage’s fluid chemistry helping his multi-layered canvas expand as never before.

Recorded down and dirty, fast and live, Get Up! is an old school creation. This kind of musical chemistry demanded the approach. But its attitude, brash, assertive, disarming and vulnerable, is defiantly modern. This is a record Harper has always aspired to make but knew required the essential life experience. Get Up! proves it’s been time well spent.

BEN HARPER
Combining funky, groove-laden soul with handcrafted acoustic folk-rock, Ben Harper enjoyed cult status during the course of the ’90s before gaining wider attention toward the decade’s end. Despite finding commercial success with the radio single “Steal My Kisses” in 2000, Harper continued to explore different musical textures during the 21st century, enjoying a solid fan base at home and a considerable amount of fame in Europe. Harper is a three-time Grammy Award winner, including Best Blues Album in 2014.

CHARLIE MUSSELWHITE
Mississippi born Musselwhite is one of the most revered blues musicians in the world. The harmonica master has won countless awards during his legendary career, including induction into the Blues Hall of Fame. He has collaborated with innumerable musical giants of the past 50 years including Howlin’ Wolf, Muddy Waters, Tom Waits, Eddie Vedder and Hooker, just to name to name a few.