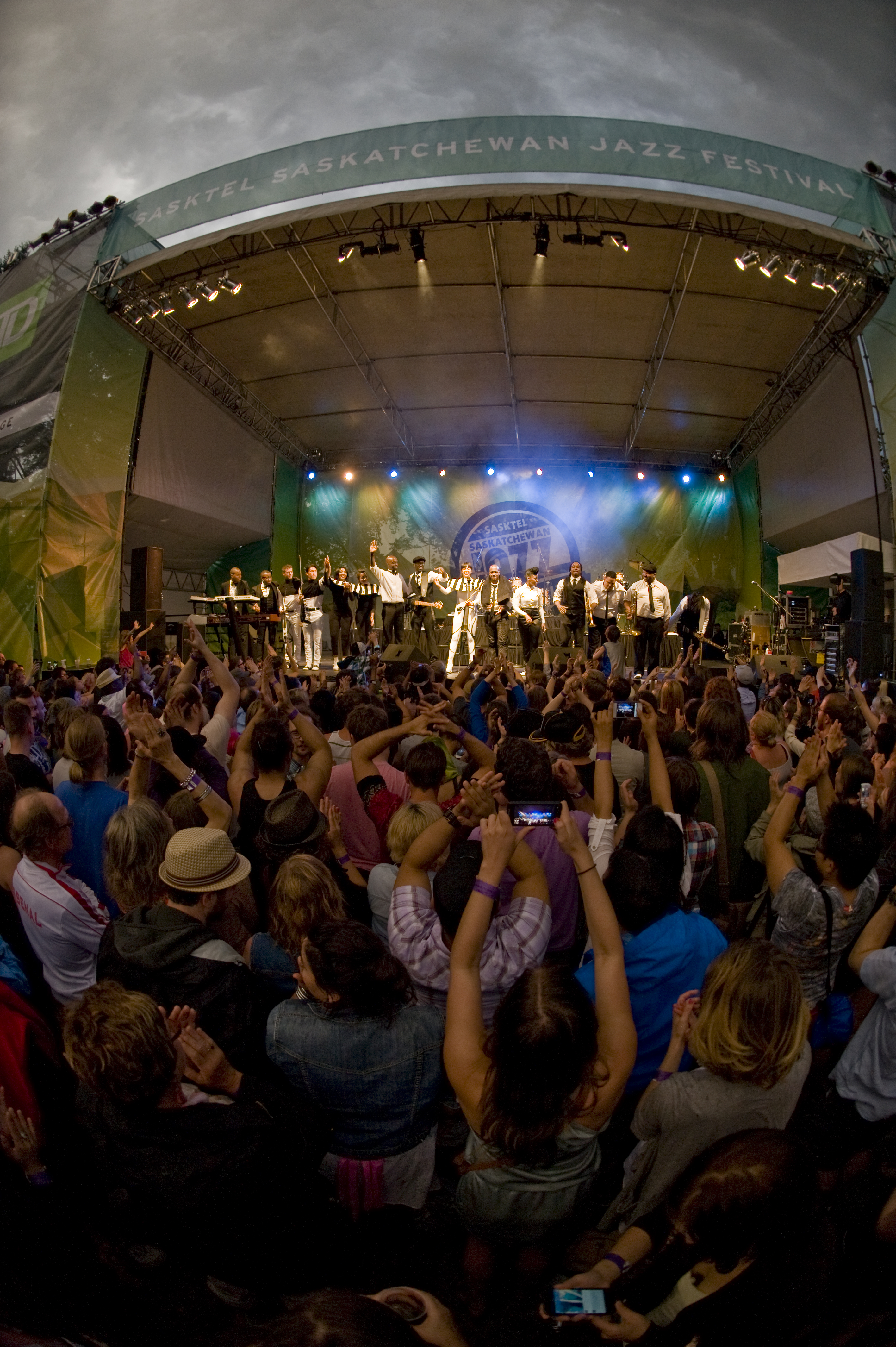 Summer is starting… when you are!

You know summer is coming when all the local music festivals start rolling out their line-ups and you start salivating at the thought of holding secret boozy drinks while listening to live acts perform outdoors. Yes, summer music festival season is upon us – finally!

Tips for attending festivals? Go to them all, even if they aren’t really “your thing.” Why? Because being seen at a festival gives you instant cool kid points that you can redeem for hot summer swag, and no one looks cool when they stay home and watch Netflix. Ever.

Here are some acts that we can’t wait to see this summer in Saskatchewan. See you in the pit (ish).

In addition to Carissa Klopoushak’s arrangement of Sufjan Stevens’ “Chicago” (probably his best song, which is saying a lot because that dude wrote a lot of good songs), Lara St.John is playing on all concerts. “She’s awesome. Her last tweet is her smashing a beer bottle on someone’s head…and she made her own arrangement of Nicki Minaj’s Anaconda,” says festival director Jacqueline Woods. Yup, sold!

Hailing from Winnipeg, Withdrawal put out a 7″ in 2011 called Faith, Flesh & Blood that we really dug. Lots of soul-crushingly heavy moments along with ripping solos and an intensely dark sound. Paired up with Mazzfest, an annual hardcore fest feast that typically features some of Western Canada’s finest hardcore, and you have your next date night already mapped out for you.

Strata Festival is one of those events that tends to fly under the radar of most, but it’s not for a lack of talent. These people are on the end of the spectrum where classical meets avant garde and beyond – one year they had a robot piano play. So we think it’s worth checking them out this year, and The Krells, a diverse electro-collective, might be the best place to start.

MoSo is bringing us nearly 70 bands this summer, so narrowing this down to one band we really want to see is actually kind of hard. That said, it would be smart to catch psych-prog-punk-whatever band Deerhoof. Their live show is complete and utter mayhem – the self-aware exuberance can only be described by seeing it all in person. Imagine all your favourite weirdo things mashed up into one night of guitar frenzy. Yup.

Also go see: Swervedriver, or, you know, over 60 other bands?

Bend Sinister are one of those bands that you can’t help but smile and shake your butt at. Highly danceable and energetic, this Vancouver group oozes fun. So that’s a thing, but this fest also features a kite flying event – this is quite likely the only time when kites and music mash up anywhere in Saskatchewan.

It’s always been nothing short of amazing how The New Pornographers can write songs that stick to your ribs like a hooky, catchy stew. It’s not exactly the sheen of FM radio waves that blasts at you from the speakers – it’s an almost indiscernible talent for writing sheer pop hummers. Remember how goddamn good “Letter from an Occupant” was back in 1999? Still good. And the new one is similarly excellent.

CBC Radio host Rich Terfry — also known to rap fans as Buck 65 — is one of those genuine performers who blends hip-hop, poetry and art into one shoebox. Writing super cathartic songs about feelings and stuff, we prefer party Terfry who released weird videos like “Super Pretty Naughty” that involved inexplicable crotch lasers and neon colours and stuff. Woo.

Remember when you were 15 and you went and saw Calgary’s Chixdiggit and you liked them better than all the other punk bands that played that night because they told jokes between their songs that were genuinely funny and charming? And then they played “I Wanna Hump You” and completely blew the roof off that sucka? And then 20 years later you have a chance to do it all over again? Weird, right?

In case you hadn’t heard, The Dead South are quickly becoming an internationally-lauded act who are playing festivals across North America and Europe and are doing a damn fine job of it as well. Thankfully, some folks back home are noticing these country-noir bumpkins become a world class group. The Borealis Music Festival in Prince Albert is the new kid on the block as far as music fests go, so we can’t say one way or another how it’s all going to pan out, but we are pretty stoked to get up and check it out.

The Regina Folk Festival has always been known for it’s strong programming, and for bringing in that one total must-see act, and this year is no different. Sinead O’Connor? Yup. Justifiably stoked.

Beer guzzling on the prairies while listening to high-energy boogie rock/metal? Sounds about right. But add about a hundred grilled cheese sandwiches and suddenly this Kindersley event suddenly got a lot more sexy. The most fun you can have west of Rosetown, this summer festival has to be seen to be believed.